Every Day the Same Dream is a spare, minimalist, internet browser-based video game, made available for free by the subversive collective Molle Industria in 2009 (with an excellent soundtrack by the multitalented Jesse Stiles), centered around the heavily circumscribed life of a faceless office worker.

(1) Nod to Artifice: The game is rendered in deliberately obsolete, blocky, 8-bit graphics, with no concessions to realism. This is an aesthetic choice which contrasts with the mundane life of the businessman hero (especially given that the original video games of the era of those graphics typically presented characters in highly fanciful, magical settings). In addition, the controls are very limited, allowing the player only to move right or left, or to interact with certain objects, but only in predetermined ways.

(2) Classic Structure: The game has a classic structure for a video game, a “quest” in which certain hidden objectives must be completed to reach the game’s goal.

(3) Transcontextual and Iconic Elements: Due to the graphic style, all the elements of the game are icons, stylized symbolic images of figures such as The Boss and The Wife.

(4) Moments of Genuine Emotion or Significance: The brilliance of the game is the way in which it takes the limitations of early video game technology and uses them as a metaphor for the life of a modern “office drone.” The hero of the game can make very few choices. This is a common feature of older or more cheaply made video games (due to the difficulty and expense of programming for a wide array of choices or free exploration), but it also is a metaphor for how people can feel trapped in their jobs, lives or marriages. The hero also has no genuine human interactions, since the characters he encounters, including his wife, respond to him only with stock phrases. Again, this is a common feature of video games, where artificial intelligence remains out of reach, and interactions with other characters are simulated (usually without much depth). It is also, however, a metaphor for the canned and mechanical interactions between real human beings in many modern situations. In the end, the message of the game is that choices can always be made, even in a situation where every outcome seems predetermined. The desperate ultimate act of the hero is a moment of transcendence into freedom, even as it can be read alternately as a final crushing defeat.

Also check out the creators’ other collaboration, the disturbing and haunting 9/11 tribute, The Building.

1 thought on “Reconstructivist Art: Every Day the Same Dream” 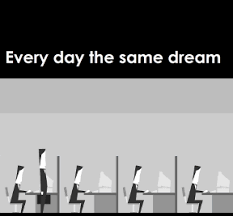 A dark, existential humanist parable about an office drone presented in the form of a video game (with a fantastic soundtrack by Jesse Stiles).