The works of contemporary artist Jason Godeke as an example of Reconstructivist Art. Originally posted September 2007.

Artist Jason Godeke has a distinctive and recognizable oeuvre centered around paintings of toys and figurines, posed in surreal and often vaguely sinister still life tableaux.

Classic Structure: The paintings generally focus on classical themes or images, such as the Garden of Eden, and are often painted in a mock-classical style.

Transcontextual and Iconic Elements: The paintings include three distinct sets of iconic images:  Standard still life subjects, such as vases of flowers, contextualize the work in the traditional fine arts tradition, while toy figurines and action figures are the mass-produced commercial playthings of modern childhood.  Finally Greco-Roman busts and figurines conjure up the classical and neo-classical tradition.

Moments of Genuine Emotion or Significance: Despite the artifice of the work, the dreamlike imagery provides a sense of emotional depth. 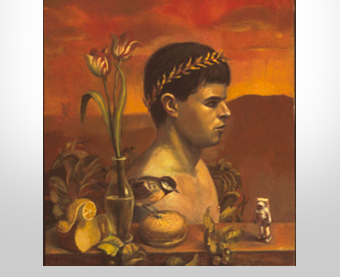 Jason Godeke’s “Unstill Lives” as an example of Reconstructivist Art

A series of paintings by Jason Godeke, exhibited variously as “Unstill Lives,” “Construct Realities,” and “Object and Figure.”